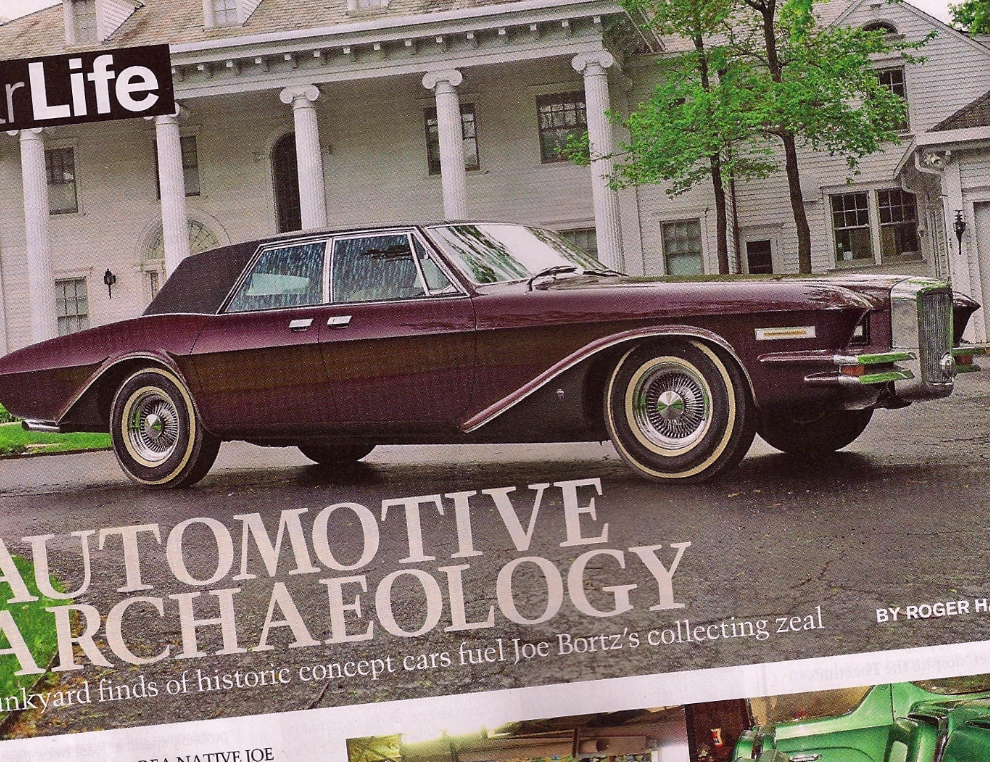 Chicago-area native Joe Bortz began collecting cars in 1962 with no idea that he’d become renowned for having possibly the world’s best collection of significant concept cars.  More than 40 years later, that’s an honor Bortz wears with pride, but it speaks to only a part of his collection of machinery.

Bortz’s car-collecting passion began with a 1928 Chevrolet Landau coupe. But it kicked into high gear in the early 1980s, when he bought the 1954 Pontiac Bonneville Special, one of General Motors’ Motorama concepts. He later acquired the ’53 Buick Wildcat, the ’53 Pontiac Parisienne and the ’55 Chevrolet Biscayne. All four concepts will be seen together at the Meadow Brook Concours d’Elegance on July 25 in Rochester Hills, Mich.

The Biscayne was shown unrestored in 2008 at Pebble Beach as part of a celebration of GM’s Motorama exhibits. Bortz found the car’s remains at the Warhoops Junkyard in Sterling Heights, Mich., in 1988. It took 22 years to restore the car, which will be seen for the first time since the 1955 Motorama in its original show condition.

“Warhoops was close to the [GM] Tech Center and was where the concept cars were taken to be destroyed once GM was done with them,” Bortz says. “Once the cars were used for Motorama, they were to be scrapped. But some people saw the historical significance of these cars, and they just couldn’t do it. But these four cars, I think, are the epitome of GM concept cars.”

GM owns one of the other significant Motorama cars, the Buick Y-Job, considered the industry’s first concept car.

The Bortz collection is not limited to GM. He has several significant Chrysler concepts, along with a growing collection of vintage motorcycles from the 1970s and ’80s. “There’s some great, great stuff available, and before I knew it, I had 40 motorcycles,” he says. “These classic motorcycles, to me, are the Ferraris of the future. But I don’t collect for the money. I collect for aesthetics. My initial reaction to anything I collect is visual. Then the history is what interests me. But whether it’s collecting cars or motorcycles, my theory boils down to one thing: I have it, and you don’t. That’s what collecting is all about.”

One car in Bortz’s collection that no one else has is what is arguably the last Duesenberg. August Duesenberg, who founded the brand in 1913 with his brother Fred, attemtped to revive the company in the 1960s. He hired designer Virgil Exner, and the 1966 Exner Duesenberg was built by Ghia in Italy. The car was an interpretation of what a Duesenberg would have evolved into if the marque had continued; it ceased production in 1937.

Riding on Chrysler Imperial chassis and powered by a Chrysler 440 Wedge bored out to a 500 cubic inches, the ’66 Duesy was built as a concept to be shown to prospective buyers. The car was taken to various cities, Bortz says, where it was typically displayed in a hotel ballroom for potential customers to look it over and place their orders.

Apparently, the salesman charged with displaying the car was never paid, and he sued for back wages.  As the company had no funds, a judge awarded him the concept.  The salesman sold the car to a wealthy New Yorker, who displayed it as the Auburn-Cord-Duesenberg Museum in Auburn, Ind. Bortz saw the car there and lusted after it for 30 years, until he got a chance to buy it.

Now Bortz drives the Duesey whenever he wants, as long as the roads are dry.  The big engine fires up quickly and idles easily, and the car looks majestic as it pu

through a Chicago suburb. “Exner got everything right on this car,” Bortz says.  “This is all original.  A real piece of history.

“When something is great, like Duesenberg, people want to return to it.”